The school councils of these amazing schools participated in a 3-month enterprise challenge, each school were given £25 start-up monies from Lakelands Hospice to host their first fundraising event. They continued to reinvest their profits into more events over a 3-month period (Apr - June 19), using the slogan ‘Think Local, Think Lakelands’.

The competition encouraged the pupils to work together as a team to raise much needed funds for Lakelands Hospice hosted a variety of events which included a Happy Cupcake Day, Easter Eggstravaganza, School Picnic, Healthy Snack Bar, Sponsored walk, plus many more ideas.

The competition ended on the 30th June and the final totals were announced at an awards ceremony which was kindly hosted by the Holiday Inn, in their prestigious Manor Suite. The Holiday Inn kindly rolled out their red carpet to meet the mini fundraisers and made all the tables look fabulous, making all the amazing pupils and their teachers feel like superstars!!

The awards were in split into two parts, the first awards were based on how much each school had individually raised and certificates and sweetie goodie bags were awarded.

Beanfield Primary School were the first school to exceed £1000 in fundraising, in total they raised a whopping £1468.02 and so were awarded a gold certificate.
Stanion Primary School (raised £353.50) and Oakley Vale Primary School (raised £128.50) each received a bronze certificate as they had each fundraised up to £499. However, St Patricks Catholic Primary school raised an eye-watering £2971.29, a truly staggering amount!! They received a gold certificate and a very, very large round of applause for their outstanding efforts.

The second awards – The Vic Hardy Brightest Sparks Award were awarded on how much each school raised, per pupil. Before announcing the winners of this award, Marina Rae our Community Fundraiser shared a special memory of Vic Hardy.

Marina stated ‘I find it incredibly humbling but also very inspiring that I was able to share with Vic The Brightest Sparks Competition before he sadly passed away. Vic would have been immensely proud of the achievements of the pupils of all four schools who participated this year. Unknowingly at the time, the Bright Sparks Competition will now be a legacy to Vic, he would have been thrilled to know that local children from Corby are and will continue to fundraise and support Lakelands Hospice’.

The Vic Hardy Brightest Sparks award was awarded to St Patricks Catholic Primary School, their amazing total of £2971.29, equated to a whopping £12.38 per pupil (school has 240 pupils)!!

Headteacher Louise Blair was absolutely thrilled that her school had won and stated ‘As a school we have thoroughly enjoyed this whole experience and the opportunities it has given our school council members. I think we have created future contestants for the Apprentice! The enjoyment side of it for me has been wonderful to see but for us it was highlighting to the children the Hospice that for so many is on their doorstep and raising money for this local worthwhile cause’. The pupils received a Lightbulb Trophy for their school cabinet, medals and the prestigious Vic Hardy’s Brightest Sparks Shield for them to display throughout the year.

Community Fundraiser Marina Rae stated ‘I am completely overwhelmed by the total monies raised by these four fantastic local schools. I am extremely proud of all the pupils who partook in our Bright Sparks challenge 2019, they are all fantastic ambassadors for their schools. Each pupil demonstrated fantastic teamwork, enthusiasm and commitment towards the challenge, they should all be extremely proud of what they have achieved’.

A massive thank you to Holiday Inn Corby - Kettering A43, our team of volunteers and our professional photographer Alan J Kane for making the Bright Sparks awards ceremony so special for all four amazing schools.

If your school would like to participate in our Bright Sparks 2020 Challenge, which will be run over four months next year (March - June), please contact Marina Rae on: 01536 747755 or email marinarae@lakelandshospice.org.uk 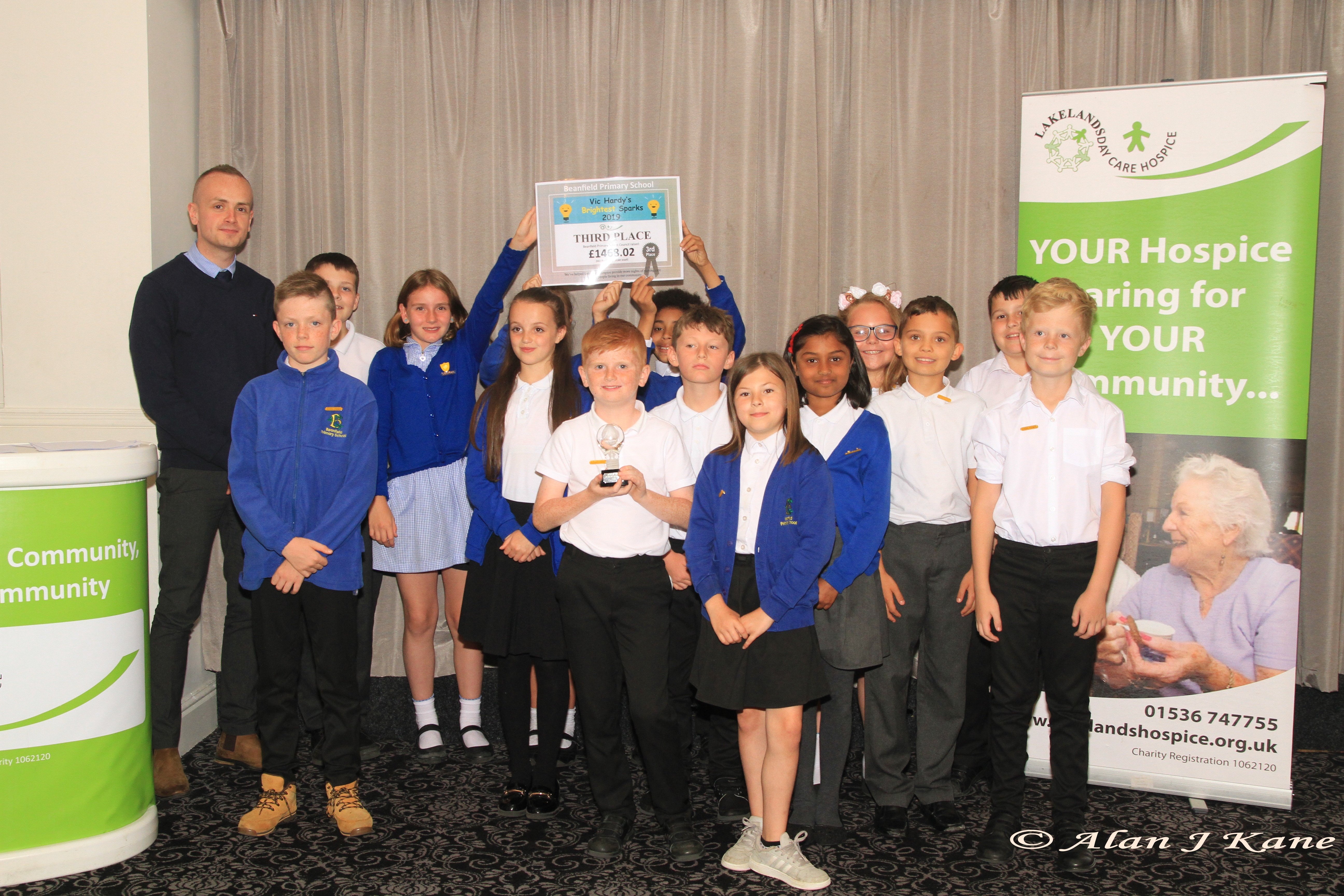